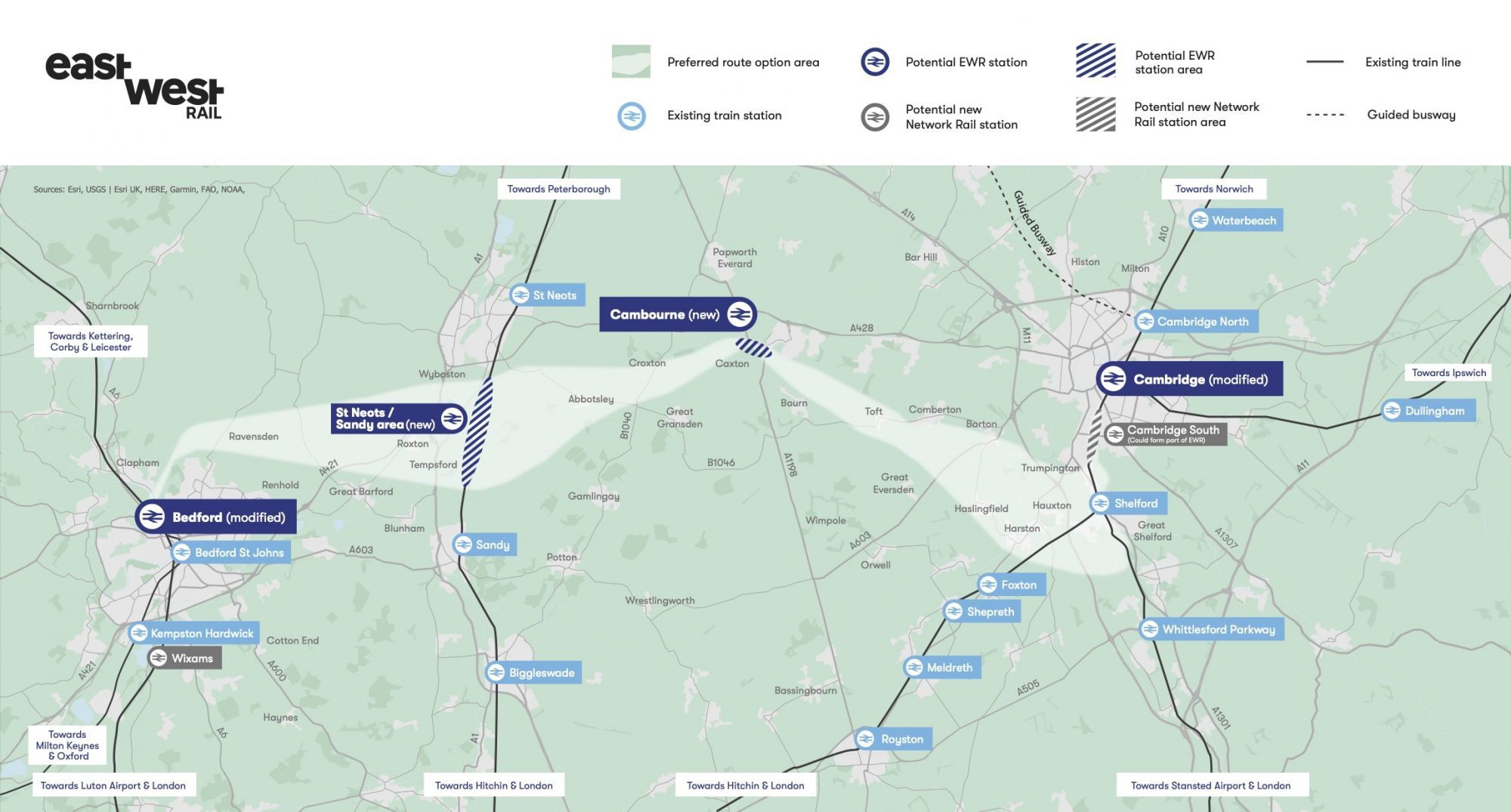 The East-West railway is part of a long-term economic investment strategy to create an industrial “arc” between Oxford and Cambridge, including the centres of Milton Keynes, Bedford etc. See here.

The first stage of the new railway, an upgrade of the line between Oxford and Bicester is now complete.

The second stage between Bicester and Bedford has started and will continue through to 2024.

The section between Bedford and Cambridge has been through one round of consultation in 2019 to choose a preferred route. Of five options put forward, the northerly option (E) was preferred (see map above or this interactive map) and is now being developed into a more detailed plan. Find out why option E was chosen here. The intention is the the full scheme will be complete before 2030.

Following a meeting with Sebastian Kindersley of CamBed (see 7 Jan update), where we heard the arguments in favour of a northern approach to Cambridge, your Parish Council voted unanimously, at its meeting on 20 January, to support the CamBed campaign to request EWR to give equal consideration to a northern approach to Cambridge. Support this campaign to stop EWR driving a railway line right through the middle of Bourn by signing this petition.

Sebastian Kindersley, County Councillor and representative of Cambed, the lobbying group proposing a northern approach to Cambridge, presented the case to parish councillors and residents of Bourn on 6 January. Sebastian outlined the logic of a line that follows the A428 and the main areas of existing and new housing developments and enters into Cambridge North, via a new station at Northstowe. Watch the meeting here. The Parish Council will be discussing its position on this issue and voting on it at its next meeting on 20 January 2012.

Update: 23 December 2020 – parishes rally around a northern approach to Cambridge

There is growing consensus between parishes between Cambourne and Cambridge affected by the new railway that the best route would follow the A428, serving the new developments such as Bourn Airfield and Northstowe, and enter Cambridge from the north. This route alignment was first promoted by CamBed Railroad and now supported by Cambridge Approaches and most vocally by the Eversdens Parish Council. Watch this video to hear the arguments put forward in favour of the northerly approach, which in short are: the route serves a larger population in the area where all the new developments are planned; the route is slightly shorter; it costs slightly less (see analysis by Cambed here); it would put a new station in Northstowe to service the large residential community in that area; it aligns with the CAM Metro proposal; it avoids damaging large swathes of countryside and driving noisy freight trains in the middle of the night through communities in the option E zone (Cambourne to Shelfords, including Bourn).

Your Parish Council has already voted unanimously to support a north Cambourne station, but is yet to discuss the pros and cons of a northerly vs southerly approach to Cambridge. It is meeting early in the New Year to discuss it and will communicate its position to residents. If you want to express your own views on this proposal then you can write to your representatives (see below) and/or sign CamBed’s petition to request that the northerly approach is properly evaluated alongside other options.

East-West Rail has published an interactive map which allows you to display a range of environmental features on the map where the railway line may go, such as footpaths, SSSI’s, flood plains, priority habitats etc. Instructions appear when you open the map. The map works best in expanded view (click “View full screen version of the map” which you can find below and to the left of the map on the screen).

The Parish Council held a Zoom meeting to brief villagers on the latest information on EWR on 4 November 2020. 25 people attended. Cllr O’Brien (chair) opened the meeting and welcomed everyone. Cllr Jones presented a set of slides describing the background, the various options for routes between Bedford and Cambridge (more detail in the 25 October update below) and next steps. During the discussion, Cllr O’Brien highlighted a key suggestion, emerging from recent consultations for a station north of Cambourne instead of the one proposed in Option E, south of Cambourne. This has a number of benefits including dovetailing to the bus/metro line from Cambourne into the city centre.

During discussion, Cllr Mark Howell updated everyone on the latest position on the Cambridge Autonomous Metro (CAM), an entirely separate project from the railway, but part of the larger infrastructure strategy: in a meeting this morning of the Cambridgeshire and Peterborough Combined Authority Transport & Infrastructure Committee, the Mayor failed to receive support for his alignment route running parallel with the A428 (start at 00:56:00 in the recording of the meeting). This opens the possibility of the Cambridge to Cambourne busway (C2C) being put back on the table. One of these “high quality public transport” schemes is an essential pre-requisite to building out Bourn Airfield and whichever one is chosen could link to a railway station in north Cambourne. Other issues discussed included environmental surveys carried out in and around the Broadway and Caxton Road, how to keep you informed of further developments and how to get involved.

A number of questions and comments were made at the meeting which can be read here.

If you would like to write to your representatives on EWR then please email:

We plan to hold further Zoom meetings (or face to face as soon as we can) on this topic and other planning issues that affect the village. This area on the website will be kept up to date and should provide you with a good source of information on EWR.

Even though the consultation led to a preferred route, there are groups seeking to investigate and influence alternatives routes. For example CamBed Rail Road argues that it makes more sense to enter Cambridge from the north rather than the “preferred” southerly approach.

The East West Rail Cambridge Approaches Action Group has consulted local parishes between Toft and Shelford and has developed six possible routes, one of which would require a station north of Cambourne instead of the current plan for one north of Caxton. This route, which would run parallel and north of the A428 before passing Hardwick and turning south, has the support of all the parishes as well as our MP, Anthony Browne, and the Cambridge Mayor, James Palmer. At its meeting on 21 October 2020, the Parish Council voted unanimously in favour of this route as it would avoid the line running through Bourn and also minimise destruction to the countryside and local villages. Anthony Browne has called for the North Cambourne station to be included in EWR’s next consultation in January 2021, to which EWR has agreed.

Your Parish Council has formed a working party comprising Cllr O’Brien, Stutchbury and Steve Jones to represent the interests of villagers to the planning authorities. We are holding a briefing for all Bourn residents on the current status of the railway line at 7:30pm on 4 November via Zoom.

Visit this site to get updates to meetings and access to documents.