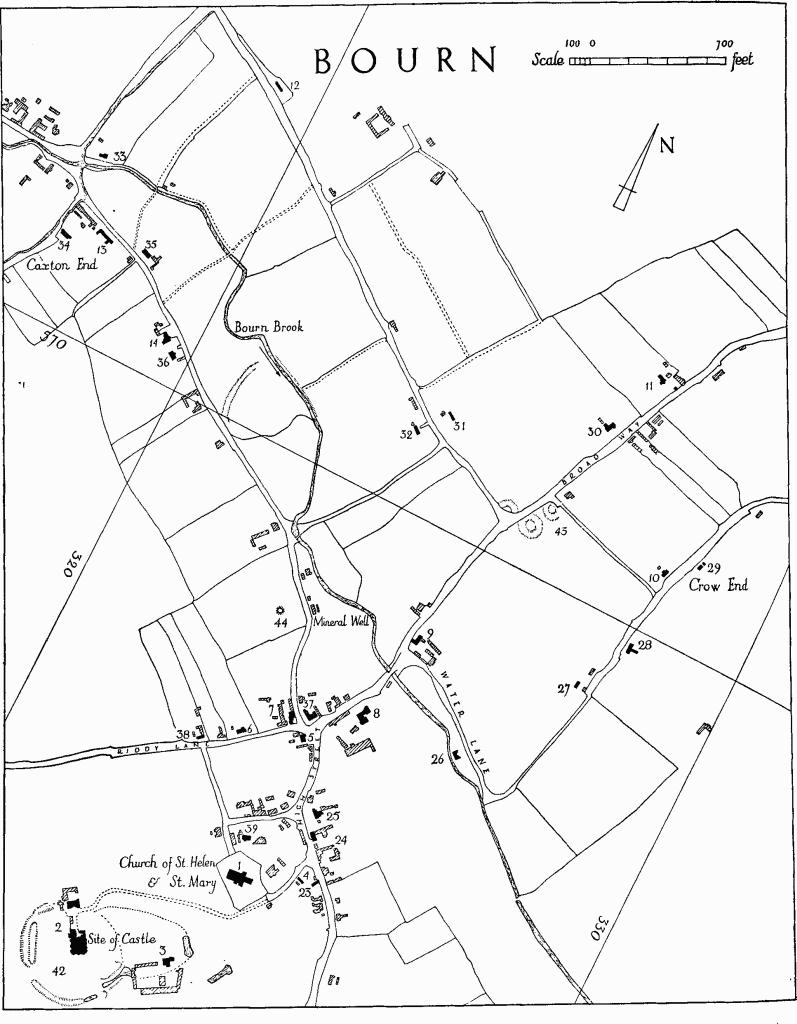 Bourn has been a settlement for over a thousand years. Roman remains have been found along the Bourn Brook and near to Bourn Hall and there is evidence of Romano-British movement along the top of the valley on the airfield and towards Caxton. Three Tumuli on the sides of Alms Hill are of Roman and Danish origin and the two which were excavated in 1909 contained Roman coins and pottery, a Celtic button and evidence of Danish feasting commemorating a fallen leader or celebrating a victory around 1010AD. The village was named from the brook which runs through what was a densly wooded valley.

Following the Norman Conquest, Picot was appointed Sheriff of Cambridgeshire, and built his private castle at Bourn on the site of the present Hall adjacent to the wooden Church. The castle was also built of wood, with a ditch surrounding the inner building and a crescent shaped bailey. The Church had two priests and 120 acres and was under Ramsey Abbey, but was given by Picot to the monks of Barnwell Priory.

The mediaeval village was in a well wooded valley and developed as a rectangle along both sides of the brook between Watery Lane and Crow End. The system of farming with common grazing land and six large fields managed in a three course rotation, lasted until the Enclosure Act in 1809. By 1279 there were 183 families – 900 people, field names and family names from this time are still known in the area. By the fourteenth century the population had fallen to 299 because of the plague, high taxes, poor weather and the emergence of the yeoman farmer and decrease in serfdom. The population rose from 400 in 1728 to 945 in 1851. This fell to 587 during the depression in 1931 but following the Second World War there was a large influx of people from London living on the airfield who later occupied the first housing estate, Hall Close, built for that purpose. This brought the number of people to its present level of around 1,000.

The medieval history of Bourn is well-documented due to detailed records kept at the Manor of Bourn, which was burned down in 1266 and soon after rebuilt. The documents were found by chance in an upper room of the Manor and deposited at Christ’s College after the Reformation. David Baxter has written a comprehensive history of Bourn in the 13th, 14th and 15th centuries: Medieval Bourn

Picot’s wooden castle was burnt down during the Peasant’s Revolt, the subsequent house was replaced by the present Bourn Hall. A timber framed house built early in the sixteenth century was added to in 1602 by the Hagar family in the form of a three-sided courtyard hall. Rainwater gutters at the front of the Hall still have the initials of John and Francis Hagar. Later the house and grounds were altered under the supervision of John Repton. The Hagar family left Bourn Hall in 1733 and the estate belonged to the De La Warrs until 1883. During this period Bourn was visited by Queen Victoria and Prince Albert while they were staying at Wimpole. The last family connection with the village was Lady Mary, daughter of the 7th Earl and wife of Major Griffin. He bought the Hall in 1921 and lived there until 1957. Bourn Hall was bought by Patrick Steptoe and Robert Edwards in 1980 and became a world famous clinic for the treatment of infertility. The first baby conceived by in vitro fertilisation (IVF) at the clinic, Louise Brown, was born in 1978.

The Church, dedicated to St. Helena & St. Mary, was built from the twelfth century onwards of field stones and ashlar, with dressings of limestone and clunch. Following the Reformation the Church was given to Christ’s College, who are Patrons and responsible for the Chancel repairs. The tower has a twisted spire and houses a belfry with a full peal of eight bells. Memorials in the church include one to Erasmus Ferrar, brother of Nicholas, founder of the protestant monastery at Little Gidding. John Collett, farmer, of Bourn Manor was the husband of Susannah, sister to Erasmus and Nicholas who were frequent visitors to the parish where the family took refuge from the plague. There were Protestant dissenters in Bourn from 1644 and there was a Methodist Chapel active in the village until 1982.

Bourn has a history of education in the village from 1520. From 1819 boys were taught in the church tower and girls received a more limited education in a nearby cottage. The Church and the Hall combined to build a fine school in 1866, designed for 144 children. Within three years eighty one children were attending, paying 2d, 3d or 6d for their schooling. This school was closed in 1958 when a new building was opened in The Riddy. The old school became the Village Hall which has recently been extended and improved with grant aid, and is a splendid meeting place for village functions.

A landmark on the Caxton Road at the boundary of the parish is the Post Mill, one of the oldest and best preserved in the country. It was presented to the Cambridge Preservation Society in 1932 .

Bourn at the beginning of the second millennium is still a village, although the local services are much reduced compared with fifty years ago, very few people employed on farms, and a great increase in through and commuting traffic, there is still a community spirit and friendly atmosphere in this place where we are fortunate to live.

For a comprehensive history of the village, the church, Bourn Hall, Manor Farm, the windmill and archeological findings see: The history of Bourn on British History Online